Time was, dining out was a chance to get away from all those beeping screens. But now, tech is invading the restaurant space, as operators look for ways to turn tables faster, keep kids entertained, and avoid errors.

If you’ve ordered your meal off a touchscreen kiosk, made a reservation with your phone, and paid with your virtual wallet, what else can perk up your dining experience? Take a look at the new ways technology may jazz up your restaurant meal in the coming year:

1. Here come the drones — Forget TGI Friday’s drone-with-misteltoe holiday debacle. They’re going to work the bugs out of this. Soon, drones could deliver food to your house — Domino’s began testing that idea in 2013. Drone companies got a lot of venture capital in the past couple years, and perhaps that’s not all with military uses in mind, hm?

For a more elegant, drone-enabled dining experience, Frisbee-shaped, levitating robots from Infinium Robotics may soon dump your plate into your lap — or, if all goes well, whizz through the dining room to deliver your meal to your table, as seen here:

2. Pizza while you game — Do you hate having to put down that game controller to pick up a phone and order a pizza? Soon, if you’re playing on the Xbox One, you may not have to. Last month, Domino’s rolled out its Xbox app to Ireland and the UK, so it’s probably not long until American gamers enjoy the same privilege.

3. “Surge” menu pricing — Disruptive car-ride startup Über’s approach to pricing is grabbing attention in the restaurant world. With Über looking to patent its surge technology, restaurant consultants are already discussing how to charge more during peak times, or add a surcharge to reserve a table on popular nights. Hopefully, that same surge technology will warn diners when a meal is having a price spike, so we can arrive early or late and get a deal.

4. Read my mind — Tired of puzzling over what to order? New technology Pizza Hut is testing analyzes where you look on a visual menu of topping items, and figures out what you want. Some people think it’s creepy, but what the industry is calling “subliminal ordering” using Swedish company Tobii Technology‘s eye-movement tracking tech could catch on. It’s fast, different, and definitely a conversation starter:

5. No more shouting — Tired of having to talk right in your companion’s ear or bellow, “What did you say?” over a restaurant’s thudding sound system? Better restaurant sound systems from Meyer Sound technology solves all that. At newly remodeled Oakland, Calif. restaurant Oliveto, Meyer installed its second concert-hall quality sound system in a restaurant. Now, waitstaff at the 28-year-old eatery can make micro-adjustments to the room’s sound system depending on occupancy, time of day, and type of event to make sure conversations are easily heard.

6. Social snacks — If you’re hungry but don’t have any cash on you, social media may come to the rescue soon. Vending machines from Innovative Vending Solutions of Dayton, Ohio, makes kiosks that will spit you out a treat if you post about an eatery or event on Instagram, Facebook or Twitter. Restaurant clients have already included Buffalo Wild Wings, Coyote Ugly Saloon, and The Old Spaghetti Factory. 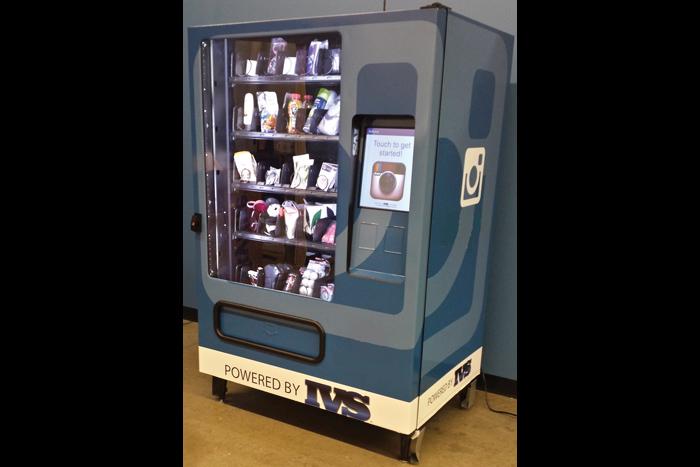 New vending machines will deliver you treats if you tweet about a restaurant or event. (Image courtesy of Innovative Vending Solutions.)

7.  Beam me my discount, Scotty — Hungry? Walk past a restaurant you like with a smartphone, and you may get texted a discount deal, thanks to the growing use of beam technology. Apple’s Apple’s iBeam is seeing competitors such as Samsung’s Proximity join the beaming fray, too. Retailers and restaurant owners alike are excited by the potential of beam tech for sending you instant deals and gathering quick feedback. Entire malls such as Malaysia’s Shaftsbury Square are installing dozens of iBeams, so that every food-court purveyor and retailer can pop a deal onto your smartphone.

I’m still waiting for my dream technology — fax me a pizza! — but some of these advances sound appealing. As a diner of a certain age, I’m personally hoping to see better acoustics come to more fine-dining restaurants in 2015.