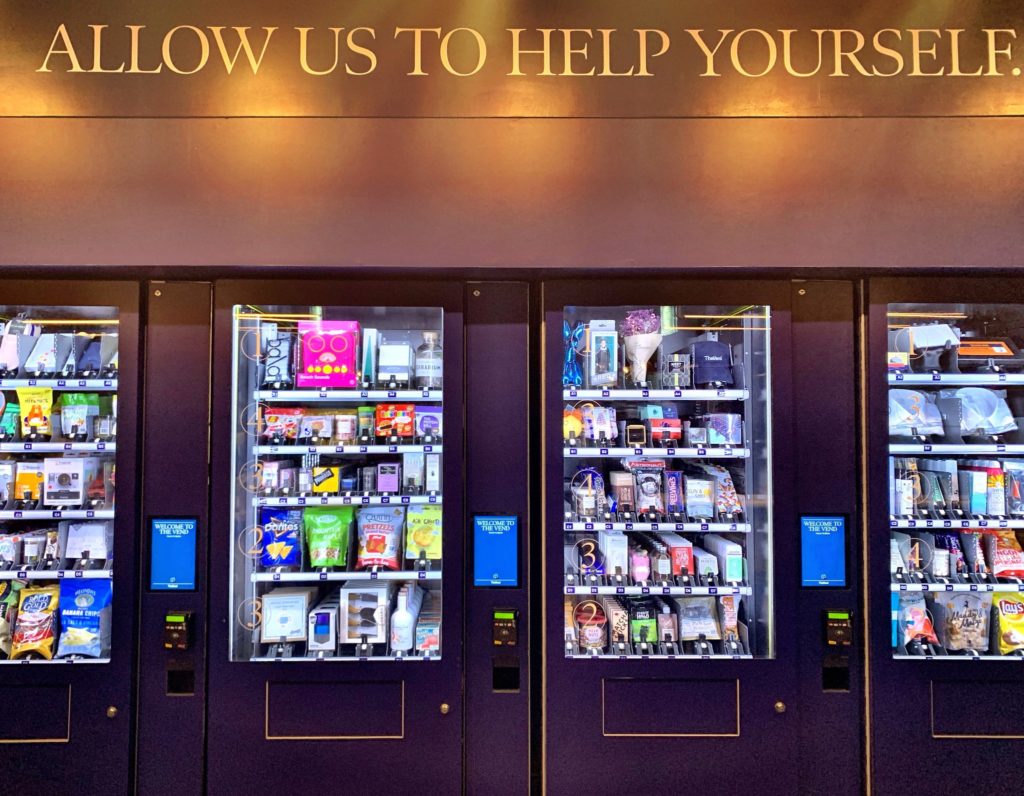 The Vend at New York’s Rockefeller Center contains six elaborately stocked vending machines, one of which contains a diamond engagement ring. (Or maybe you want the Ruth Bader Ginsburg bobblehead instead?)

When they’re ready to propose, most people typically head to a jewelry store where they can take the time to peruse the various stones and settings. But there are much quicker (not to mention quirkier) options available: vending machines.

Last year a hotel in London began offering vending machines with engagement rings. And over Labor Day weekend, the owners of New York’s Rockefeller Center, Tishman Speyer, opened the Vend in the concourse, one floor below where the annual Christmas tree sits. That room contains six elaborately stocked vending machines, one of which contains a diamond engagement ring.

The New York machines are stocked with shelves of pretzels, kale chips, Red Bull drinks and Kombucha tea. With the swipe of a credit card, you can also buy sunscreen, toothbrushes and stain-rescue kits. (Among the highest-selling items: a piñata filled with undisclosed surprises and a Ruth Bader Ginsburg bobblehead doll.) 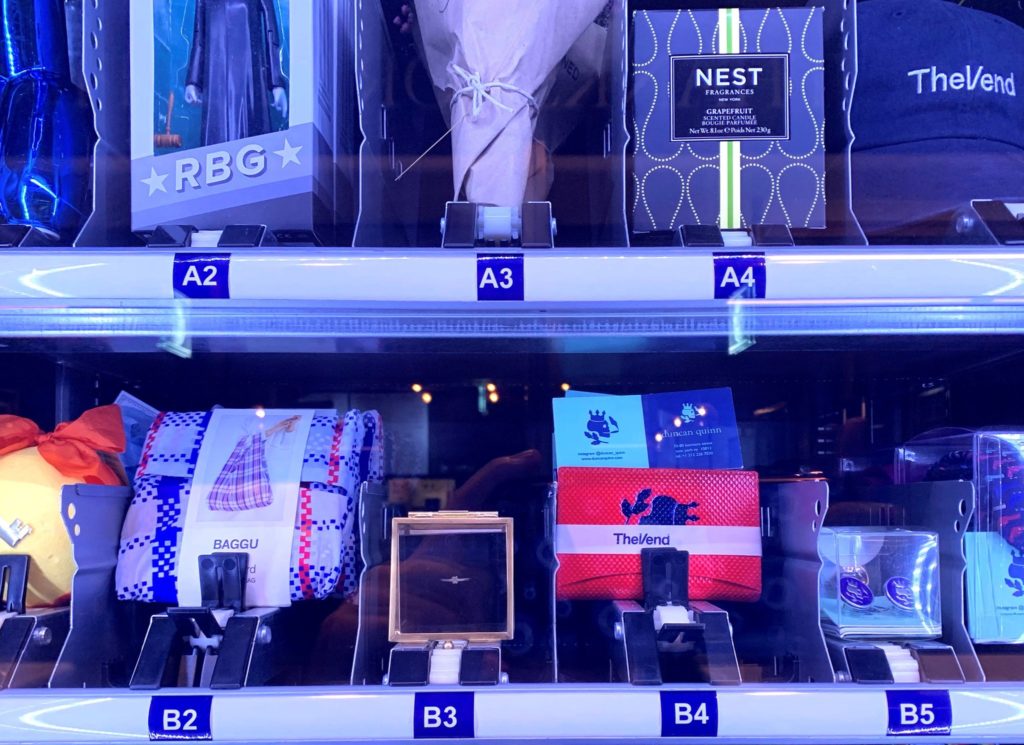 For $800, a diamond awaits, at the Vend in the concourse at New York’s Rockefeller Center.

The engagement ring (size 6.25) is in the fourth machine in the B3 slot, almost hidden among the more colorful gifts. Made by Fitzgerald Jewelry of Williamsburg, Brooklyn, it features a yellow rose-cut diamond surrounded by gray-colored diamonds set in 14-karat gold band with matte finish. It costs $800 before tax.

EB Kelly, the managing director of Tishman Speyer, says the ring is there for couples who might get swept off their feet by the romance of the place. “You can easily imagine the person who comes in and is having this amazing moment,” she said.

It’s not such a far-fetched notion. Couples do get engaged at Rockefeller Center, perhaps by the tree or in the Rainbow Room.

Ms. Kelly jokingly added that you could almost pull off an entire wedding with items from the vending machines. Grooms can wear the Duncan Quinn cuff links ($525) and a necktie ($285). Brides can carry a dried bouquet that stays fragrant for three years ($25). Photos can be taken with a Polaroid camera ($100). The machine even sells Polaroid film in color or black and white ($17 each).

No one has bought the ring in Rockefeller Center so far. But an Autograph Collection hotel in London called the Bankside has had buyers of rings in its vending machines. 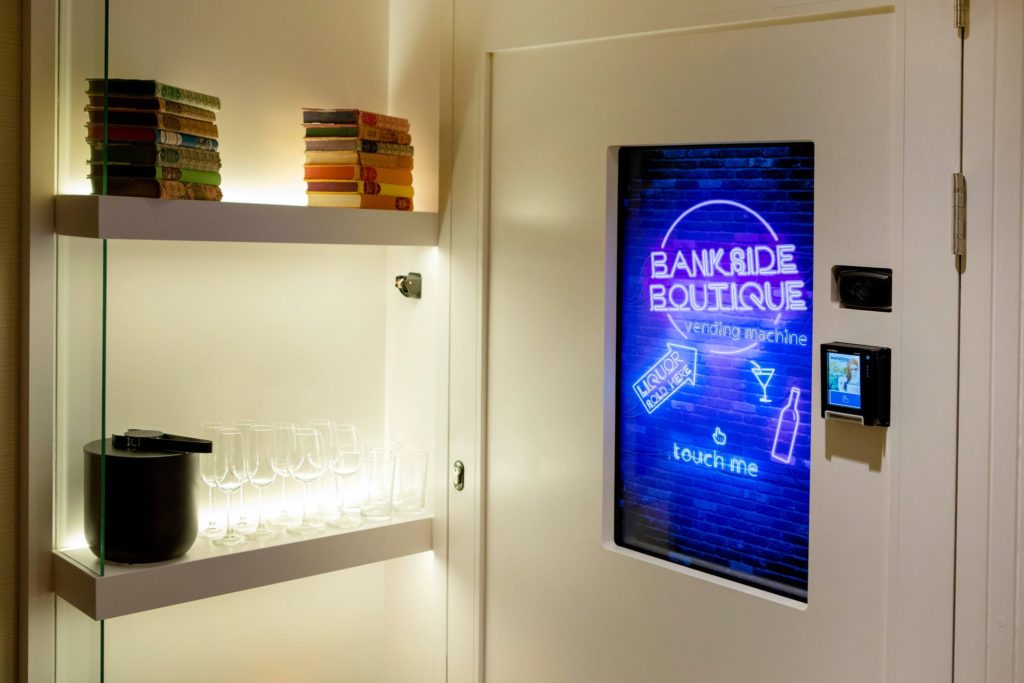 The Bankside hotel in London has had nine buyers of rings in its vending machines, which are located on each floor of the hotel.

The artsy hotel on the South Bank, which opened last October, has sold nine engagement rings from machines located on every guest floor. (They’re more popular than the sparkly underpants also sold in the machines; eight of them have been bought.)

One reason for its popularity might be the cost. The price for each engagement ring is 125 British pounds, or around $154. The gold-plated band of the ring is adjustable; its stone is a labradorite. “It’s a beautiful iridescent stone with some hints of blue, green, and gold,” said Marie-Paule Tano, the founder of Rokus, the London jeweler that supplies the rings for Bankside. “For those who believe in the healing energy of gemstones, labradorites are known to protect against the negativity and misfortunes of the world.”

The Bankside’s vending machine ring, a labradorite stone, is adjustable and about $150.

Douglas McHugh, the hotel’s general manager, sees the vending machines as another amenity. “It’s a fun and experiential way to give guests exceptional quality and wide choice of refreshments and amenities,” he said.

In the same way a guest might need toothpaste at the last minute, he also felt they might need an engagement ring if they got wrapped up in their vacation and felt it was the right time to pop the question.

The machines don’t track the identity of the purchasers, so there is no way to tell if the rings were being used for serious proposals or as a prank. There was at least one spontaneous proposal in the hotel’s restaurant, though, where the ring was used. “They said yes, so we hope that wasn’t a joke,” Mr. McHugh said.

Either way, the purchase certainly makes for a good story on social media. Or as Ms. Kelly put it, “What a way to start off your lives together.”