The UpTake: MLB used Innovative Vending Solutions’ vending machine in Cincinnati on Monday to drive social media traffic and engage fans as it gets ready to sell tickets for All-Star Game weekend events. 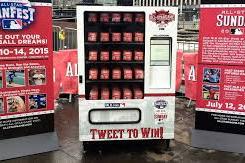 When Major League Baseball needed to create some big buzz around the All-Star Game events coming to Cincinnati, it reached out to a Dayton, Ohio-area company.

On Monday, MLB used a Twitter-activated vending machine made by West Carrollton-based Innovative Vending Solutions to drive all kinds of Internet traffic, lure media coverage and get fans excited. MLB was at Cincinnati’s Fountain Square, partnering with the Cincinnati Reds to promote All-Star Game weekend in July.

“We were trying to think of something fun to do with the fans and the community,” said Jackie Secaira-Cotto, director of special events for Major League Baseball. “The city is pretty excited about hosting the All Star Game so it seemed like a perfect fit to then see the surge in social media and a great way to engage the fans.”

Innovative Vending Solutions — which goes by IVS — is a developer of tech-focused automated retail machines I’ve been writing about here for nearly two years. The company, launched in 2008 by Patrick McDonald and Jeff Thibodeau, has grown to a staff of about two dozen employees. IVS has done other high-profile work, but this new Twitter machine for Major League Baseball could lead to work with other teams and in other professional sports.

IVS’ vending machines tap social media platform’s millions of daily users to drive interest while offering a cool way of interacting with customers and fans at trade shows and other events.

In Cincinnati on Monday, fans lined up to use a specially-branded All Star Game machine. Fans Tweeted a hashtag and three-digit number to activate the machine and win prizes, which included everything from apparel and keychains to the grand prize of tickets to the main event.

MLB officials worked with the Reds to spur interest in tickets that go on sale Tuesday for the T-Mobile All-Star FanFest at Duke Energy Convention Center and All-Star Sunday at Great American Ball Park.

“It’s a great way to get fans engaged and create a buzz before tickets go on sale,” Thibodeau said.

Secaira-Cotto told me IVS got the contract to build the All-Star Game machine because MLB officials heard about a project the company had done for the Boston Red Sox. She said the machine looked great, had no glitches and was easy to use, which is great news for a first-time vendor to the organization.

“We’re pretty excited to go back to our desks … and just take a real good look at what was happening here,” Secaira-Cotto said.

Over the years, IVS work also has included machines for IKEA; talk show host Conan O’Brien, who ordered 10 machines when he broadcast live from Chicago; and Harley Davidson, which bought a machine for selling merchandise to tour groups because it didn’t have space for a gift shop; as well as the film industry, which used the machine at movie premiers.