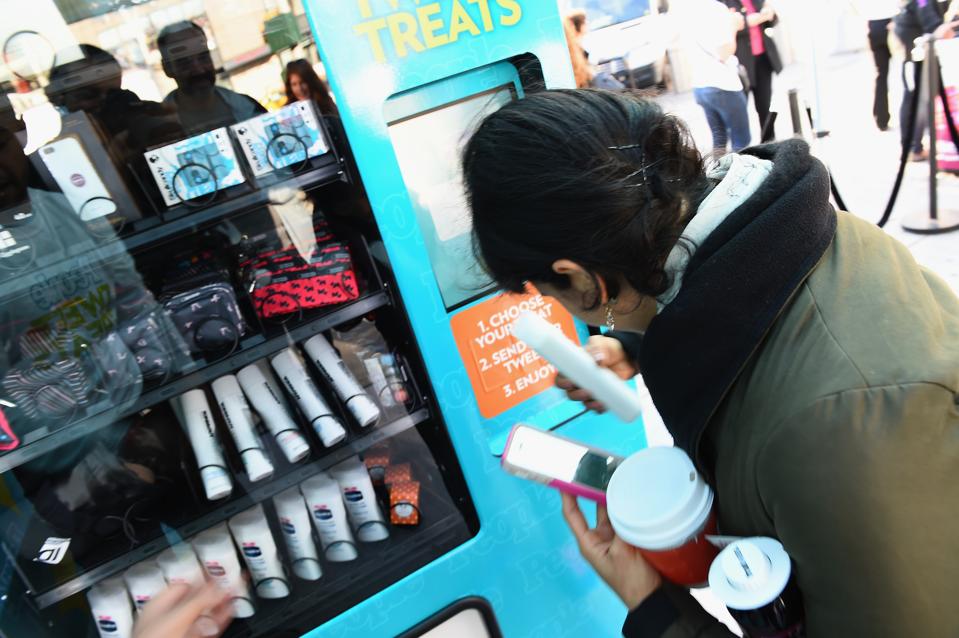 Current trends are likely to make future vending machines quite different. For example, the ‘TWEET FOR TREATS’ vending machine dispenses products based on Tweets. (Photo by Larry Busacca/Getty Images for PEOPLE)

Vending machines have long been a convenient and relatively low cost method of delivering food and drink. They have also been a source of unplanned eating and drinking (after all, currently, few people plan to have lunch or dinner, throw a party, or meet for a date at a vending machine), which makes vending machines a target for improving the diets of children. With a history that dates back to ancient times, vending machines are likely to remain a part (and perhaps a growing part) of the world’s diet in the future. But several current trends have left the vending machine industry at a crossroads.

Current Trend 1: The obesity epidemic. In case you’ve been hiding in a vending machine for the past decade, there’s an ongoing obesity epidemic, including an obesity epidemic among children, which has motivated a closer look at where people, especially children, get their food and drink. More and more states and municipalities have been considering policies that more strongly regulate what is available in vending machines that fall under their jurisdiction. For example, on March 29, the City Council of Glendale, California, voted unanimously 5-0 to completely replace chips and sodas with fruits, vegetables, and nuts in vending machines on city property in two years when current vending machine contracts expire. This new provision would supersede the existing policy that mandates at least 40% of vending machine items should be healthy. Despite vending machines being a significant source of revenue, the City Council felt that such a measure would be important to help combat childhood obesity (In Los Angeles County over 20% of children are obese).

Also, the Maryland State Senate has been discussing the possibility of a Maryland Healthy Vending Act, which would mandate that 75 percent of products offered by vending machine on state property meet specified minimum healthy food standards and is sponsored by Delegate Antonio L. Hayes. Joel Gittelsohn, a Professor of International Health at the Johns Hopkins Bloomberg School of Public Health and member of the Global Obesity Prevention Center (GOPC) at Johns Hopkins, and Naomi Rapp a masters of policy student at the Johns Hopkins Bloomberg School of Public Health, wrote an editorial for the Baltimore Sun, supporting the potential Act. Rapp and Gittelsohn emphasized that: ”Importantly, research that has examined vending machines has shown that increasing access to healthier foods changes behavior and leads to increased consumer purchases of these foods. At the same time, these changes are either profit-neutral or enhance profits for vending machine businesses.”

There is some evidence that such regulations may help prevent obesity among children. A study led by Dr. Daniel Taber and published in the journal Pediatrics in 2012 showed an association between state laws that regulate the types of foods available to school children beyond federal school meal programs and less gains in body mass index (BMI) among school children. The effects were not strong, and it’s unlikely that changing vending machines offerings alone will stem the tide of the childhood obesity epidemic. Nonetheless, movements to change vending machine offerings are afoot.

Current Trend 2: Busy schedules and laziness. There’s a fine line between being too busy and too lazy to do something. (A survey found that 40 percent of millennials in a survey believed that “cereal was an inconvenient breakfast choice because they had to clean up after eating it.”) But regardless of whether work deadlines or following Selena Gomez on Instagram is keeping you from going to a store to shop for food and cooking, the demand for ready to eat food seems to be growing.

Current Trend 3: Online ordering and mobile applications. With each passing month, more and more food products are available online. (Yes, apparently you can now buy unicorn meat in a can). An increasing number of national and local food sources are making their products available for online ordering and delivery. (Delivery still occurs via person as no one has figured out yet how to email a pizza). As turnaround and delivery times get faster, the convenience of online ordering could eventually begin to rival the convenience of vending machines.

Future Trend 2: Vending machines that provide nutritional and health education. Other food sources such as restaurants and grocery stores have been voluntarily (or the opposite of voluntarily) moving towards providing more nutritional information and education about their products. For example, last year, New York City passed an ordinance that requires chain restaurants to place a salt shaker icon on menu items to indicate food that exceed the daily recommended limit for salt intake. Also, a number of grocery stores have been taking steps to offer more nutrition information and tips to choose healthier foods. The Food and Drug Administration (FDA) already requires operators who own or operate 20 or more vending machines to disclose calorie information for food sold from vending machines, subject to certain exemptions.

Future Trend 4: Vending machines that provide other products related to food. Many other businesses such as Starbucks have moved towards bundling related goods and services after their initial product line was successful. Want something to drink? How about a pair of underwear as well?